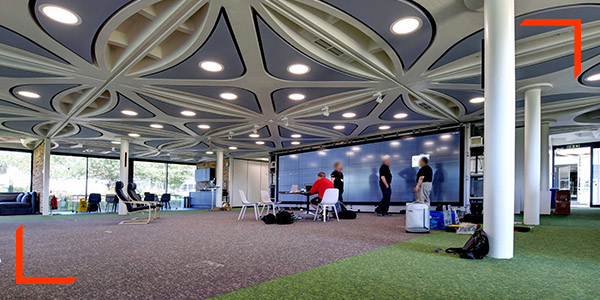 AV integrator CCOMM has installed a new multi-functional audio-visual system at the Cambridge communications hub of one of the world’s leading providers of technology to the oil and gas industry. Completed in late 2019, the new build project combines speaker systems from Italian manufacturer K-array with Germany’s Innosonix multi-channel amplifiers.

Both pro audio brands are distributed in the UK by Shefford-based 2B Heard, and it was to the company’s technical director Dave Wooster that CCOMM turned for assistance in specifying the audio system.

“We’d used K-array on previous projects and were entirely satisfied with the results,” said CCOMM project manager Andrew Giles. “As this project required a full design and build approach because the client was effectively converting the space from one usage to another, we asked Dave to submit proposals for a high performance audio system, working from our detailed dimensional drawings.

“Our client wanted to create a large multi-purpose open space with a combination of meeting rooms, a space for Town Hall meetings, and collaborations. Primarily it’s a data sharing room, in which participants are able to present a variety of content – that might be charts, graphs, or scientific data – and share that onto a big UniSee video wall.” 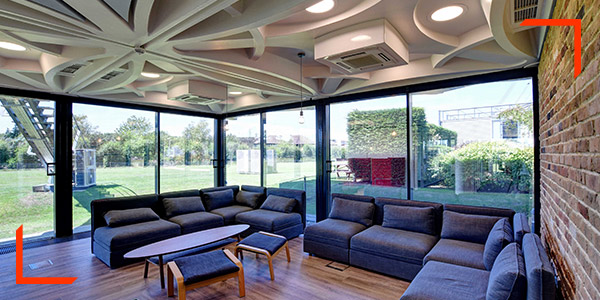 CCOMM embarked on a major transformation of the original scientific laboratory into an inviting open-plan area that could be used for meetings, presentations and for marketing purposes, and equipped with a sound system that would do justice to all these varied activities.

“I’ve always been a fan of K-array, but when we fired this system up for the first time I was really impressed. I would describe the sound as transparent but rock-solid at the same time.”

A major challenge for Giles and the CCOMM team was the difficult acoustics of the spectacular vaulted ceiling which created a myriad of reflections that made listening uncomfortable. “We decided that acoustic treatment was essential, and so we installed special cut-to-shape acoustic panels in the ceiling to cut down the reverberation time,” said Giles.  The focus of the audio-visual system centres around a 6m x 3m Barco touch screen video wall. On either side of the screen Viper-KV52 passive line arrays are installed behind acoustic grilles supplemented by Rumble-KU26 subwoofers. There’s also additional sound reinforcement on the metal columns to spread sound coverage evenly around the 100-capacity room.

The speaker system is driven by a 32-channel amplifier from German manufacturer Innosonix. The ability to assign any of the Dante-enabled inputs to any group of outputs made the MA32-D a natural choice to drive the many speaker feeds, quite apart from its pristine audio quality and FIR filter functionality for precise equalisation. CCOMM Head of Engineering Richard Bellingham noted Innosonix’s evident suitability for this project: “Not only did the simplicity of a single box cut down on what would otherwise have been a huge amount of kit installed behind the video wall, it also reduces the amount of heat generated.”

“The audio is quite simply spectacular,” said Giles. “I’ve always been a fan of K-array, but when we fired this system up for the first time I was really impressed. I would describe the sound as transparent, but rock-solid at the same time. In addition, the level of control provided by the Innosonix amplification was exceptionally useful and enabled us to precisely tune the room as part of an acoustically treated space.

“It’s a tremendous result, and I think the headroom and dynamics are particularly impressive. One thing that stands out is how silent the noise floor is, which encourages the dynamics of the sound. The clients love it. It has totally transformed the space and their use of it, so much so that we’ve already been asked to go in and do further work,” he concluded.