What’s so sacrosanct about 10 dB Signal to noise ratio?

What’s so sacrosanct about 10 dB Signal to noise ratio?

Does one size fit all?

The objective of a PA system is to broadcast speech with high intelligibility so that it is understandable to the intended listener. If it does not achieve this simple objective, then there is absolutely no point in having a system in the first place and even more so if it is a VA system.

The two major destroyers of speech intelligibility are noise and reverberation, though these are by no means the only determining factors. In order to help achieve adequate intelligibility, several standards such as BS5839-8, BSEN 50849 and BS6259 all recommend or require a PA/VA system to achieve and maintain a signal to noise ratio (snr) of 10 dB or more. For example, 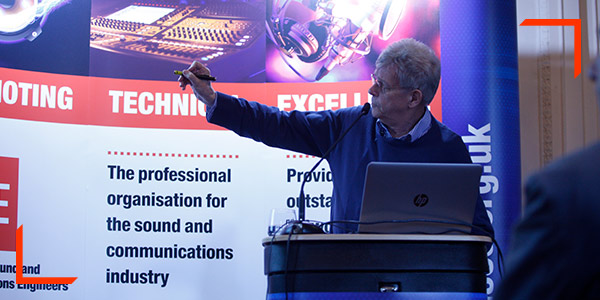 “In order to achieve a satisfactory level of intelligibility, the VAS should be designed to generate a speech signal level over and above the occupational noise. Generally, a signal-to-noise ratio of at least 10 dB is needed to obtain an acceptable level of speech intelligibility”.

BS6259 “Ideally, the system should be designed to achieve a minimum speech to background noise or signal to noise ratio of 10dB”

It should be noted, that as the ambient noise or target SPL are referred to in terms A weighted sound pressure levels (dBA) the resultant snr is then also an A weighted measure

BS7827 (2011) – also recommends a signal to noise ratio of 10 dB although, as we will see later, the shortly to be published 2019 revision takes a rather more enlightened approach.

So where does this figure of 10 dBA snr requirement/recommendation come from and will it guarantee adequate intelligibility ? The answer to the first question is that I have absolutely no idea and the answer to the second, absolutely not. 10 dBA snr is no guarantee whatsoever of achieving 0.50 STI or whatever the intelligibility requirement is ! 10 dBA snr however is a good starting point and rule of thumb, yet it appears to be set in stone as a definitive requirement. But in some cases, 10 dBA snr will not be enough and in others a lower snr could be perfectly adequate and indeed necessary to mitigate potential environmental noise pollution issues. External railway platform and outdoor venues & installations are a case in point, there having been several court cases and threatened prosecutions due to the excessive noise from a PA system set to maintain a 10 dBA snr when a value of 4-6 dBA would have been perfectly fine (and far less annoying). The tail, therefore, would appear to be wagging the dog, as it is the STI (intelligibility) requirement and calculation that should be setting the snr – not the other way around! One size does not fit all ! So let’s put some science behind the numbers and deal in facts rather than speculation and guidelines of dubious authenticity.

I will start the enlightenment with the case of noise only as the cause of potential reduction in intelligibility. It may come as a shock to realise that there is no fixed relationship between signal to noise ratio and intelligibility and that it is also dependent on the absolute SPL. Take a look at figure 1. Here I have plotted STI as a function of snr for two different noise sources. The lower (x) axis is of increasing snr – measured in terms of dBA whilst the vertical (y) axis is STI.

The figure shows that in the case of noise A (bottom blue curve) a signal to noise ratio of just 3 dBA will theoretically achieve an STI value of 0.50, whilst for the upper red curve (noise S), a snr of 0 dBA can produce 0.50 STI. Now these are effectively anechoic conditions, so accounting for this and adding some allowance for calculation tolerance, might suggest that for these ‘outdoor’ conditions signal to noise ratios of 3-6 dBA will be sufficient – with 10 dBA theoretically producing STI values of 0.67 and 0.87 respectively. Now, if environmental noise is not an issue, then 10 dBA snr would be great to have and certainly should not be discouraged. (The intelligibility of any PA/VA system of course should be as high as it possibly can be, 0.50 STI is not a target but the minimum acceptable value for a VA system. Indeed, for some PA/Sound Reinforcement applications, 0.50 STI would be a disaster, being woefully inadequate).

The other feature worth noting from the graph, is that for the lower curve (noise A), once the snr increases above ~ 18 dBA, the STI actually begins to decrease. 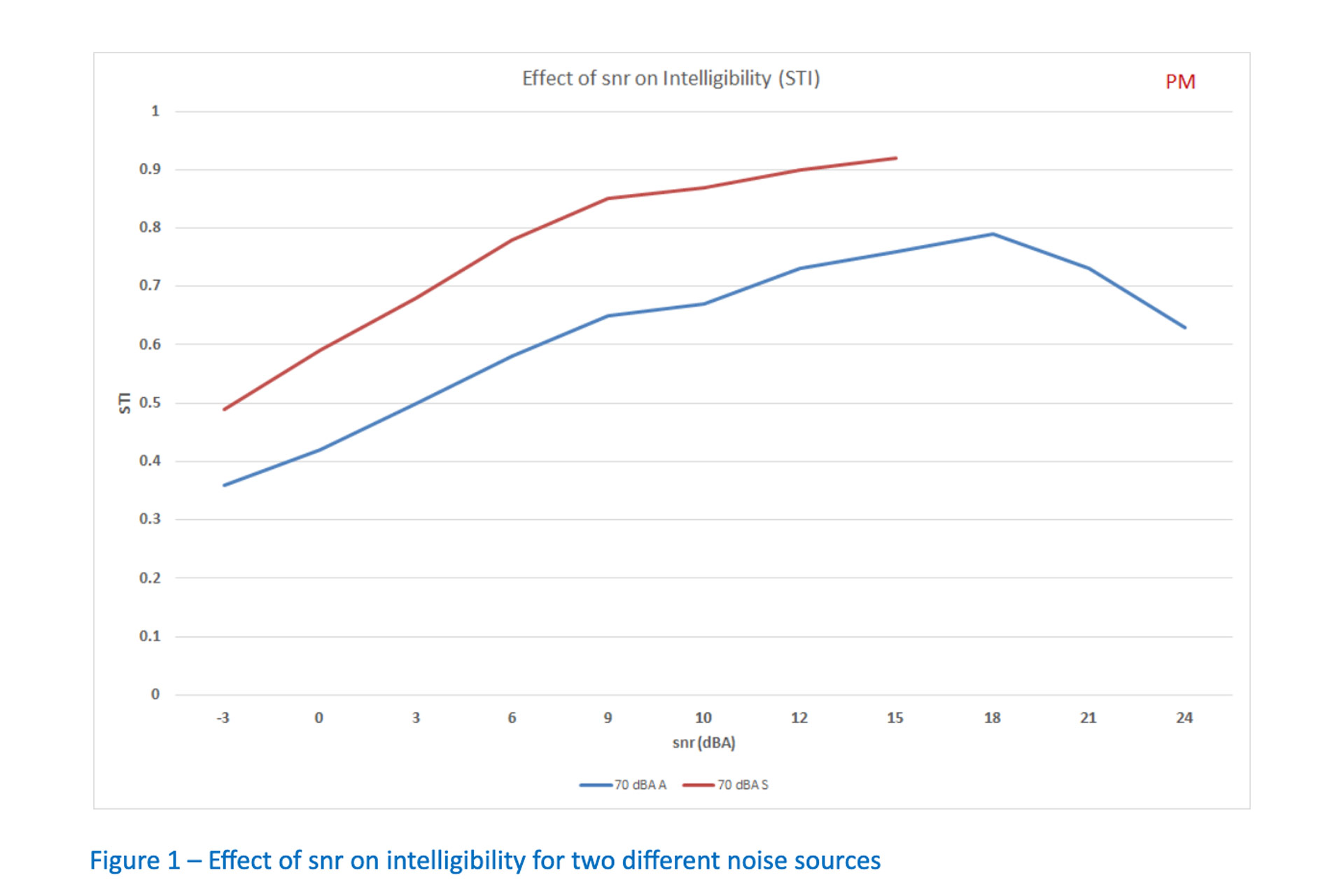 This decrease is not a universal rule but effectively specific to this particular noise and SPL condition, though the effect will also occur for many other situations, as it is inherent within the STI calculation. This is further illustrated in Figure 2 which shows a family of three snr/STI curves for a third noise, again with a different character. Once more, these are noise-only ‘anechoic’ conditions for illustration purposes, though they are not far off being applicable for an external PA system away from buildings and reflections. In this example I have used background noise levels of 60, 70 & 80 dBA.

The curves in figure 2 show the resulting STI values over a 30 dB range of ‘A’ weighted snr values, extending from -3 dB to +27 dB.  The first point to notice is that again, snr and intelligibility (STI) are not absolute but also depend on the overall SPL. For example, at 18 dB snr, the STI values are 0.70, 0.79 and 0.84 respectively for the 3 noise conditions (80-60dBA). The reason for the differences relates to our hearing system and the associated effect of ‘masking’ of sound at higher SPLs. For the 60 & 70 dBA conditions, the STI/snr relationship is linear up to about 10 dB snr, at which point the curves begin to diverge. For the 80 dBA noise case, this happens earlier at just 3 dB. Clearly having an automatic noise sensor and gain control maintaining a 10 dBA snr, whilst a laudable objective, may not actually be achieving the expected result of providing consistent intelligibility.

So far, the above examples relate to anechoic or open-air conditions, though potentially maybe not too far from a real-world external PA system.

However, in most cases, a PA/VA system will be in an internal environment with reflections are reverberation. In fact, many many systems have to operate in highly reflective and reverberant conditions such as shopping malls, stations, museums and concourses etc. So I will now take a brief look at the combined effects of noise and reverberation.

Figure 3 shows the results for four different scenarios, with reverberation times ranging from 0.8 to 1.8 seconds. As can be seen from the graph, the lower three curves do not achieve 0.5 STI – despite having snrs of up to 15 dBA. The upper (blue) curve however achieves 0.50 STI at 12 dBA snr. So clearly the 10 dBA requirement / rule has failed ! (as it must). Note that the snr/ STI curves are essentially linear i.e. the overall SPLs are below the thresholds where signal masking begins.

Out of interest I extended the snr range to 25 dBA and the results for this are shown in figure 4. Now, scenarios 2 & 3 achieve 0.50 STI (red and green curves) and even the 1.8 second condition (lower purple curve) increased to 0.47. So again, showing that a simple 10 dBA snr requirement is absolutely no guarantee of achieving adequate intelligibility. 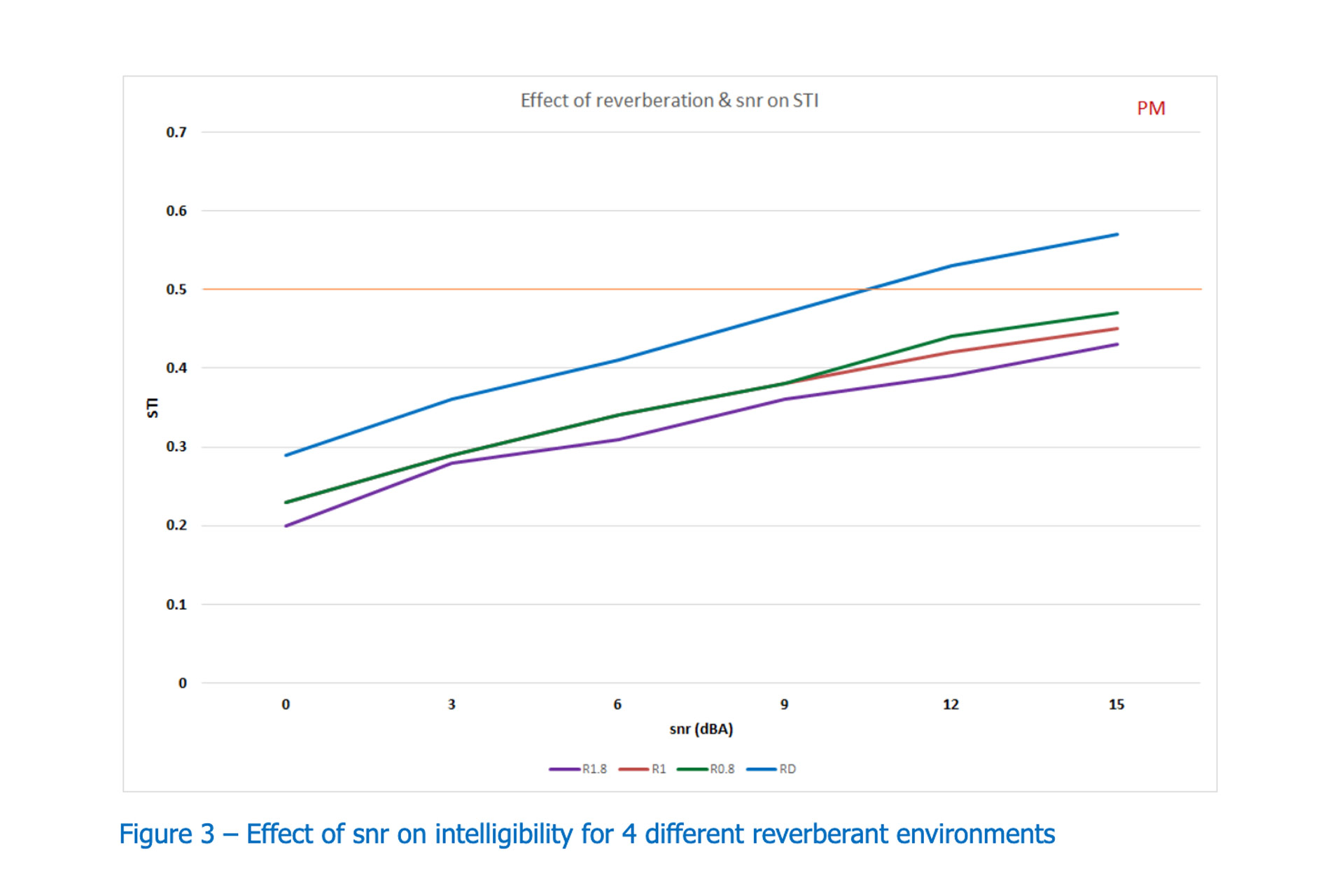 It is therefore interesting to note that the shortly to be published version of BS7827, “Designing, specifying, maintaining and operating emergency sound systems for sports grounds, large public buildings, and venues — Code of Practice“, which was written by audio practitioners rather than Fire Alarm experts, takes a more enlightened approach to snr. To quote:

“As a ‘rule of thumb’, the level of speech broadcast over a PA/VA system should normally be at least 10 dBA greater than the ambient noise level, however in open-air situations a lower SNR can still achieve the required STI and may be applicable and even desirable in order to help mitigate potential environmental noise issues“.

“Furthermore, in highly reverberant spaces, the SNR may well need to be greater than 10 dBA in order to ensure adequate intelligibility. The STI requirement should set the needed SNR, and the value of 10 dBA should only be used for initial design or assessment purposes. Where they are used, ambient noise sensing controllers, as a consequence, need to provide a range of adjustment, from 3-20 dBA“. 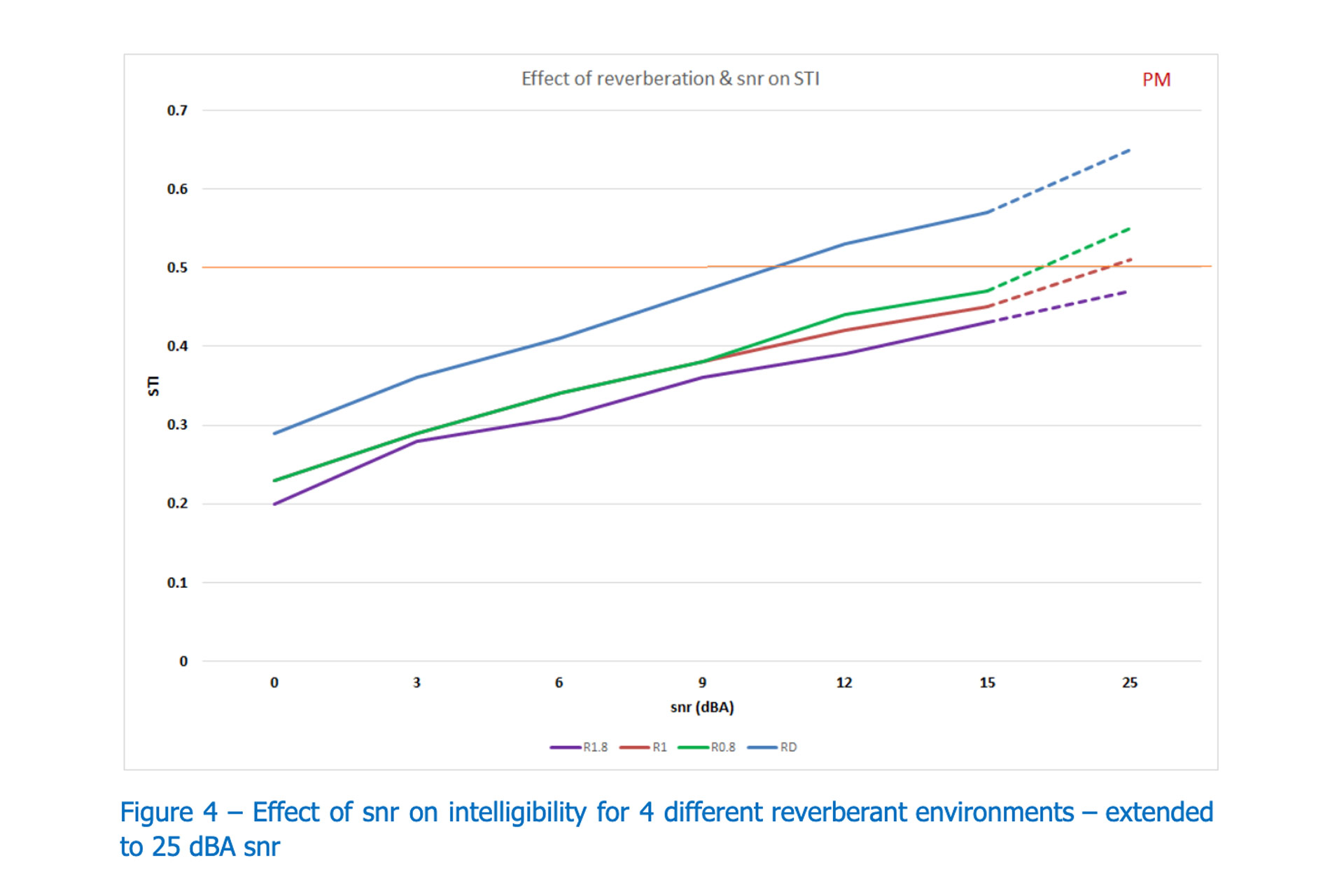 I still do not know where the 10 dBA snr rule came from – but there certainly was little science behind it !

Equally, PA/VA systems should be designed to optimize the available performance rather than maximise what can be got away with, as seems to be the aim of a number of companies. 10 dBA snr will always sound better and give superior performance to 4 dBA or 6 dBA snr – where it can be employed. But equally, as we seen, 10 dBA snr may not be enough and 15 – 20 dBA may be required.

One size does not fit all ! 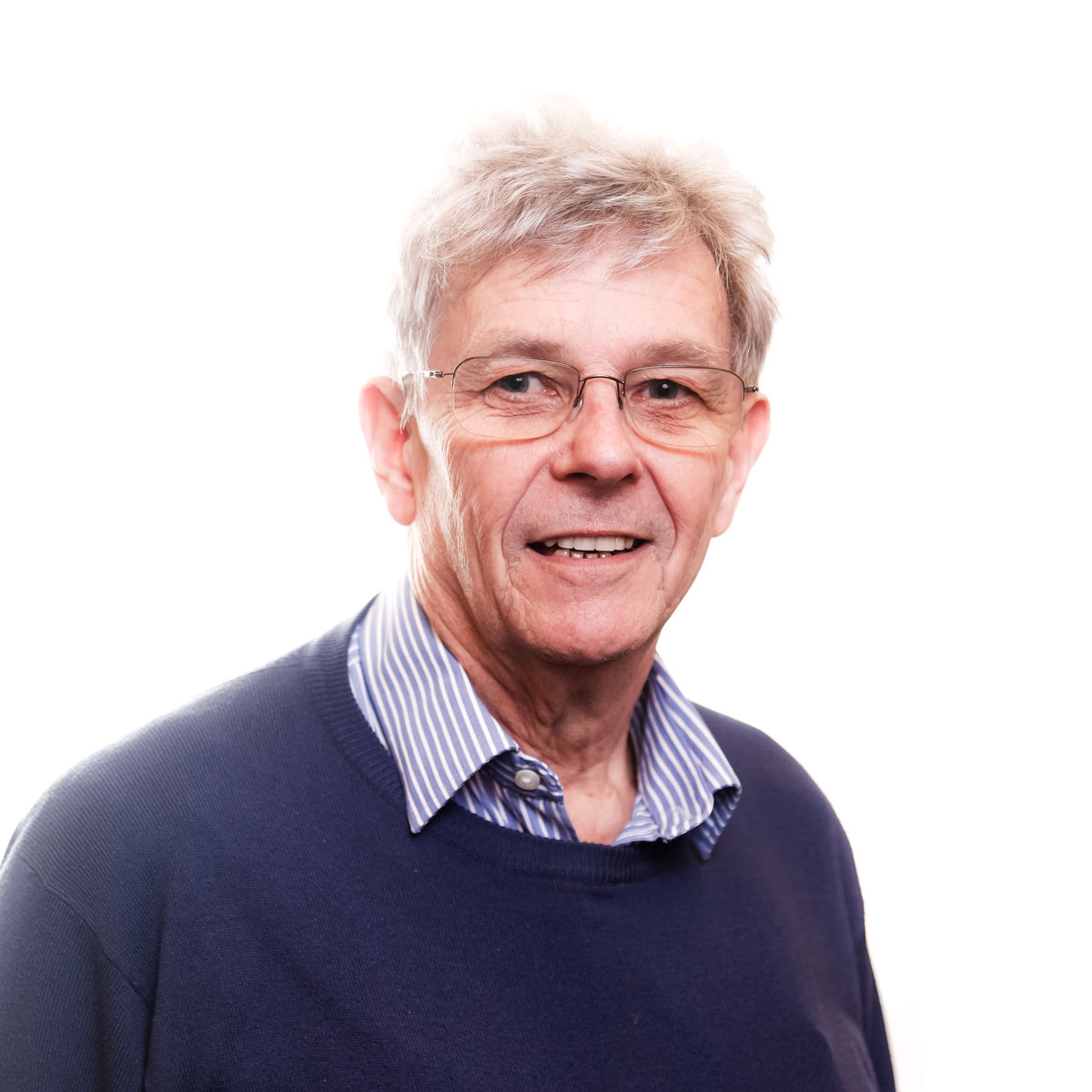 Although he has a string of academic qualifications as long as your arm, Peter Mapp is renowned for his down to earth and pragmatic approach to sound system design and acoustics and also for his relaxed style of lecturing.  Peter has lectured all over the world and was nominated ‘Instructor of the year’ by the National Sound Contractor’s Association of America.

Peter is a member of several British and International Standards committees and is currently chair of IEC 60268-16, the standard for the measurement of the Speech Transmission Index (STI). A background in physics, acoustics and measurement and on a practical level, designing and measuring over 800 sound systems, give Peter a unique perspective to discuss sound system design, speech intelligibility and measurement